With the increasing industrialization trend forest cover has decreased from 33% to 8%. This has contributed to increasing issues like global warming.Scientists have determined that the major factors causing the current climate change are greenhouse gases, land use changes, and aerosols and soot. On the other hand industrial waste is contributing to increase the air pollution. Over the last decade, the talk on global warming and climate change has dominated major events and conferences. Politicians and global leaders have campaigned under the idea of helping combat the issues of global warming. As such, a forestation has been one of the most talked-about methods of dealing with global warming. Manav Seva is putting efforts to increase tree coverage in the Sanad area. Trees give off oxygen that we need to breathe. Trees reduce the amount of storm water runoff, which reduces erosion and pollution in our waterways and may reduce the effects of flooding. Many species of Wildlife depend on trees for habitat. Trees provide food, protection, and homes for many birds and mammals. During the year 2019-20, Manav Seva trust completed tree plantation activity with the financial support and guidance of the Tata Motors Limited. Total 12,000 saplings already planted in the places nearby sanand area. These places are LilapurSchool, Bakarana, Soyala,Vanadiya, Kalana and Zamp. This activity was carried out under the guidance of the forest department Sanand. They provided training to Manav Seva Team to look after important task like god, watering, monitoring, providing manure, pest control etc. Manav Seva also did arrangement of drip irrigation set and tree guards. Manav Seva took the responsibility of these trees for 3 years until saplings converted in to full grown trees.To percolate this programme in to the minds of the people Manav Seva did some additional efforts. Some of these are

Impact of the plantation activity

Use this QR code for Donation 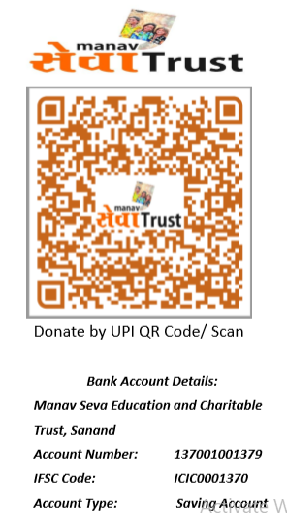